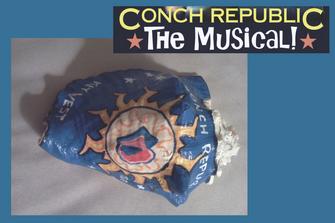 The sudden appearance of a roadblock at the main highway entry to the Keys threatens a recent surge of tourism that has been keeping the city of Key West afloat.

The town leaders - Mayor Dennis Wardlow; Ed Swift, Chamber of Commerce President; and Virginia Panico, Hotel & Motel Association President - try desperately to figure out how a laid-back town can stand up to unsmiling federal forces that ignore their pleas.

The local "Conchs" - Bubba, a bar owner; Maria, a baker; and Steve, a drag queen - despair as they feel the effects of tourist dollars evaporating like moisture in the Key West summer sun.

But all the fussing and fuming result in one of the greatest PR stunts in history – the hilarious, spontaneous, true-to-life battle that established what you, our audience, are here to celebrate: our beloved, fierce, and “fun-dependent” Conch Republic!

CONCH REPUBLIC - THE MUSICAL: BACK AGAIN!